This summer hubby has had some amazing opportunities through his work - he went to the Euro Cup in July and then he went to the Olympics in London in August!  He works hard but he does get some pretty cool business trips too!

So he needed a few thank you cards for the for the Olympic trip.  I like how the Euro Cup Thanks turned out but the images in MFT's All Star Dies didn't work for the events he went to.  What to do?! 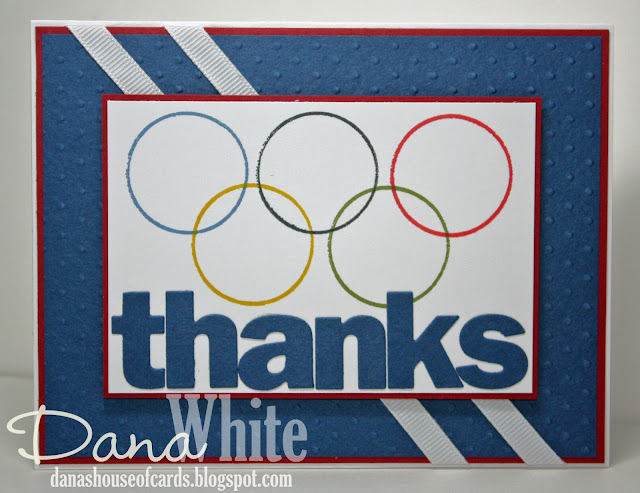 I decided to incorporate the Olympic rings into my card.  I first tried cutting then out using nesties but didn't like how they looked.  I didn't have the simple circle die in the size I wanted so as I sat there drinking my Perrier it hit me - the lid from the Perrier bottle was the perfect size!  I sanded off the bumps from when you open it and gave it a try.  You have to be very careful as it shifts easily smudging the circles but after a few tries it worked.

The inks are memento tuxedo black, Distress inks peeled paint, faded jeans, mustard seed, and barn door.  For the thank you I used MFT's By the Letter die-namics.  I used the British Team colours since the games were in London and added some angled ribbon because it needed a little something.

Thanks for stopping by, I hope you like my Perrier inspired card!!

That is SO clever and the most perfect Olympic thank you card!!!

Awesome! I agree you are brilliant!
Very cool card Dana!

Brilliant idea to use the water bottle lid. Love how you incorporated the Olympic rings! So cool!

How cool is that? A Perrier bottle top...I often find myself inspired by things I see throughout the day but never like this and often times I forget them unless I can head right to my craft room. Very neat card my friend!