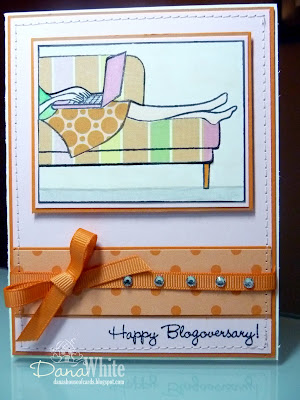 I was excited when I was chosen as an Ambassador for MFT's release party last night - then I realized I had to come up with a challenge and the euphoria quickly wore off!! I thought long about what to do and threw several ideas out at by BFF some were good some not so good....what I settled on were 2 of the things I always seem to do - paper piecing and Pumpkin.

MFT e-girl is stamped with mementos ink and the couch is paper pieced with Stephanie Fizer digital paper from MFT, her skirt is paper pieced with Basic Greys Offbeat paper. The rest of the image is coloured with copics.
The base is Gina K's 120lb cs layered with Pumpkin Pie and Pink Pirouette which is sewn on as is the strip of pumpkin DS paper. I added some pumpkin ribbon and some MFT Adornments.
The sentiment was easy because a friend has an blogaversary just around the corner; so now I just have to pop this in the mail (that could be my downfall!!)

Make sure you pop over to SCS and the MFT forum to take part in this challenge & MFT for their new releases from the party last night!!!
Thanks for stopping by
Dana
Posted by Dana White at 3:29 AM

Congratulations!, and I LOVE your card! That stamp is so cute! I would not have thought of a blogaversary card! U rock! (of course, that's probably why you were chosen Ambassador!)

Congratulations Ambassador Dana! You are the paper piecing Queen, you know. May I say, that is one perfect bow!

Yay Dae!!! What a perfect "YOU" Ambassador challenge. I love all the paper piecing...have you worn out your snips yet? :)

Dana, this is an ADORABLE Card! Love it!